skip to main | skip to sidebar

next joint from PARANORM, this time with D.EVILMAN and DJ STRICTNINE on the sets.

this is the GOD VS THE DEVIL EP and it totally contains 4 mind-blowing tracks (also counting that intro-song which is a bit short but still dope as hell!).

again, I just love all the tracks on it but if I had to choose one then it'd be "the god vs the devil"....wanna now why? well - just listen!

the record was dropped back in 99 (the CD a year before in 98) on the Fistfulyayen Label, distribution also by Superscience Sex (like the Omnigod-12").

again full 320kbps rip with all instrumentals etc. available on that wax - enjoy!

aight...u thought that blog was dead?


well, personally I had the same feelings for long time for various reasons. main thing surely was that my damn laptop has a loose contact which results in mono recordings only (great!). then I was and am freakily busy with my job, fam etc.


well, since my homie Hightower (check for "TheMrHightower" on youtube where he is reviewin crazy stuff) ripped these vinyls for me I'm able to finally spread again some great music...hope u gonna enjoy!


In march 2010 I already made a review about the good man PARANORM. meanwhile I got in contact with him and he was kind enough to send me some amazing records which Ima present u now.


first is his contribution in the crew OMNIGOD (= Paranorm, DJ Doz, Another Dimension & Shinichi). this wax was released in 2002 on the Superscience Sex label and according to Paranorm only pressed about 100 times! the 3 tracks on it are all pure fire but personally I dig the "keep my head up" joint the most...but listen urself and decide.


NOTE: this is a full rip including clean, dirty versions and instrumentals plus the shit is in high-quality 320kbps - enjoy!!!

and mad props again to Hightower for the ripz!

what's good peepz. lil' notice to ya'll bout Docta Bec:
hit my man Jaz's blog CRDS (here) and find a great interview with Bec plus nice tunes and exclusive (unreleased) material from him.
.
peace!
Posted by ral278 at 12:16 AM 7 comments:

2nd audio-snack for today - hope y'all gonna enjoy this piece of wax!
the name of the artist here is...

I googled this record and artist and couldn't find any other link than to this twelve here and am not sure if this is his only release.
the wax was dropped in 1999 on Nexus Records and as the run-out is ....001 I assume it was the first (and only?) record on this label .
anyway - on it u gonna find the main title which is pure heat: "supreme soloist". if u dunno then listen to it and I'm sure most of u cats gonna agree this shit gives u "audio-orgasms"!
the b-side brings you "rhymes adventurous" which is a really solid and smooth track and I even can live with that female chorus-part as it somehow fits to the whole melody. 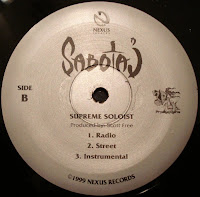 Sabotaj_supreme soloist-12"
.
when doing search bout the artist I stumbled upon another cat called SABOTAWJ (check here). name's spelled slightly different and so far I couldn't find out if it's same cat or not (I don't think so...still ain't sure at all). so I sent a message to this Sabotawj and hope I can share more information on this soon...
pz!
UPDATE: just got confirmation from Sabotawj that he ain't the Sabotaj reviewed in here..
ps: mad props to my man Mirro who gave me this wax to review in here...nice find homie!

after long time my buzy (and honestly also sometimes lazy) ass was able to rip some new stuff for y'all. here's 2 drops from the emcee known as ...

aka Dr Becket. Dude is active since the late 90s already and I'm sury y'all know most of his earlier releases (check discogs and then youtube where u can find lots of his older work). if u wanna get in touch wit him then check his myspace.
back to the twelve here which is available in tha tube but downloading from there is sometimes not known to peeps and then quality may not be best...
here u can get that delicious wax from 2001 with the crazy smooth track "lyrixcism"...relax, puff lah (if u do so) and simply enjoy it! on the flip u get "hittin hardest pt.2" which is solid but isn't as dope as the original. 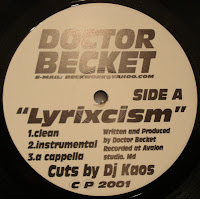 Dr. Becket_lyrixcism-12"
.
next piece is an EP titled "docta bec" which is limited to 200 copies only and mad nice considering that the material is from 2007 "only". all the 6 tracks on it are freakin dope - using a lot of laid back jazz n blues tunes. if u didn't hear that wax already def give it a try - this is another record from him that is mad underrated and when looking at all his work I really wonder why dude didn't get more credit in all these years!?!! 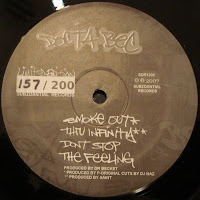 I ain't sure if the Doc put out some more stuff by his own later on (he had some appearances on other works though)...maybe u guys got some more info?
anyway - enjoy the material here and listen to his other works that you can find all over the net, it's def worth it!!!
Posted by ral278 at 2:16 AM 24 comments:

nice lil compilation on the small "Inquisitive Records" label, dropped in 2002.
title of this comp is:

the reason I bought this wax is the side with the 2 tracks from the Michigan crew COMMON GROUND (DJ Heavy, Jayem & J.C. Inquisitive) which are the mellow n easygoing "react" and "yathinkitsjus" which uses pretty crazy samples that convinced me to buy this cheapo some years ago.
the flipside contains a track by Common Ground's main producer: Lacks aka Lacksidaisycal aka Elevator Music... title is "what's up" and the tune is rather kinda club-joint that ain't really my cup of tea. last track on the wax is a beat by Lacks (Elevator Music) - a nice one to relax for sure!
well - hope u gonna enjoy this one....lemme know! 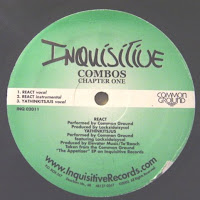 you may assume already by the headline that this twelve is of French origin....
I present you here a nice piece outta 2004 from the crew (LE) CASE NEGRE.
The crew is part of the French Boogotop massiv and from what I know started to get the first shines back in the mid 90s when they were featured on famous DJ Cut Killer's mixtapes. If discogs data's correct then their first own release was in 98 and personally I also only know of the 2 wax mentioned there. you can go the youtube (here) and have a listen... 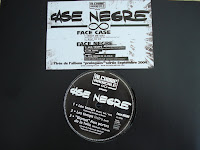 about this record:
well, as mentioned this was dropped in 2004 (only) but this should not keep u away from givin' it a try (also not cuz it's not an English rappin' record)!
I first saw the main title "bout de vie" on French "zik"-music channel and was blown away by that fuckin sick beat and it's damn heavy bassline! hardcore-tunez for y'all ears!!
but as the record was an independent drop, distribution was freakin' poor and it was a hassle to get such a copy (I finally found one bout 2 years later in a 2nd hand store).
only then I noticed the other 2 tracks on the flipside and was even more happy! not only I had this sick a-sider "bout de vie" but on the flip there was also a really smooth and relaxing track titled "les temps". the last track is called "aux portes de la folie" - another pretty solid track!
well, give it a try and let me know if u feelin this wax too! 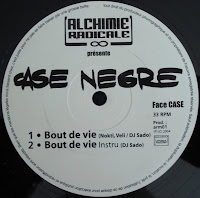 In this post (and pretty much the 1st time ever in this blog) I bring you a little compilation.
All the tracks can be found rather easily on vinyl (this info for the vinyl-heads).
Mostly the songs are taken from various compilations that I was too lazy too rip completely and two are from a former post were the sound-quality was pretty fucked up.
tracklist:
5E - paradox remix
Bored Stiff - conspiracy theory
Chan - chronic whisper
DuoDie - maintain
Mystik Journeymen - black sands
Nightbreed - I got your back
Phats Bossilini - the boss
Shadowman - necessity
T-Max - mind over matter
Wil'Pak - no mono
.

time again for some non-english-rappin stuff in here so op'n yo' earz!
the twelve of today is one I got (more or less) since it dropped back then in 97 on the Polydor label. OTIERRE (also OTR) is the name of this quite popular crew from Varese, Italy. The super-group formed in 1991 and broke in 1998. during this period OTR had quite a lot of emcees (Esa, Polare, Torrido, Azza, Intruso, Limite) and DJs (Fede, Irmu, Vigor, Vez, Nitro) and on this 12" as well as the respective LP (titled "dalla sede") they also featured female emcee La Pina. La Pina was born in Florence and is kind of the Italian rap queen as she's told to be the 1st female rapper in this country. 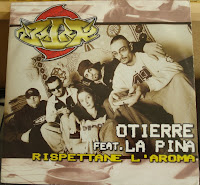 let's talk about the content: on this nice vinyl u gonna find 2 tracks which is the main title "rispettane l'aroma" - a nice head-nodder and my absolute favorite and also kinda anthem for me n the homies back then on the flipside, "play our position". I remember that all the times this track was played at jams the crowd would just go absolutely nuts! "play your position" also features guest emcee from Bruxelles' (Belgium) CNN crew - Rivalcapone.

I know that many of my readers are not really willin' to listen to stuff they don't understand but I definitely recommend to give this sh*t a try. I'm pretty positive u won't regret it, especially cuz of dat b-sider "play our position"! 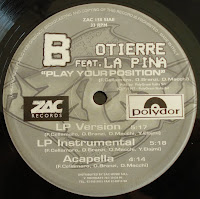 well then, enjoy this n drop a comment how u feelin this twelve...

what's good peepz? another rip from my cratez. this time it's about the emcee HORESON J.A.E. & (DJ) EDUARDO SCIZZAHANDZ from Flint, MI.

The 2 had their debut appearance on a cassingle when they were in the group "Phunky Lab Munkeez" (together with Ed's younger bro BOY WONDER). Find here the track "klassic emcee" from that work from 1997.
.
Then in the late 90's and early 2000 J.A.E. & Ed released several tracks and among these he was able to drop the great "translation regulation-12" on the "A Lab Cult" label in 2001.
The wax comes with 3 songs: "translation regulation" as the main title. on the flip-side you gonna find the tracks "in time jesus returns" and the great posse-track "march madness" that features the emcees PUGSLEE ATOMZ, NAME OBSCURE, OPTIMUS PRIME, O-TYPE STAR and J.U.I.C.E.
all 3 tracks are from very good to f?ckin great IMO - I really dig this record and consistently spin it on the decks since I bought that wax back in 01.
as I said already, J.A.E. dropped also some other tracks in the early 2000 and here you can get 2 of them - enjoy! BTW: these 2 tracks were produced by STARVING ARTISTS CREW members IQ and SP. 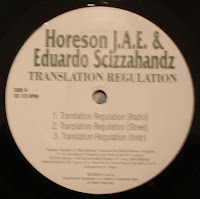 .
Later on J.A.E. changed his name to Tellie Tel so you can google that too and find some more recent material from him...
.
aigh'then - peace til the next post!